Balvenie’s Tun 1509 has reached its eighth batch! This expression features whisky drawn from three first-fill sherry butts, six second-fill sherry butts, five refill puncheons, and four ex-bourbon barrels, all brought together in a traditional marrying tun for three months. This series has been rather well-received, and with good reason – the whiskies are ace!

Tun 1509 is one of The Balvenie’s traditional oak marrying vessels. THE BALVENIE DISTILLERY remains totally dedicated to the TRADITIONS, CARE, and CRAFTMANSHIP of malt whisky-making and has been owned and managed by the same INDEPENDENT family company for five generations.

TASTING NOTES – Aromas of baked citrus entwine with notes of orange marmalade and maple syrup. Layers of rich toffee, lashings of buttery vanilla, and a swirl of house honey flow over the palate to create an unmistakable texture and form the perfect sip. The initial sweetness from expertly toasted oak dispels to reveal a candied ginger and spice finish. 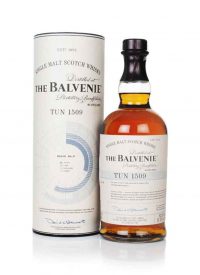