Size: 375ml
Country: United States
State: Kentucky
Over 100 years ago, Kentucky bourbon was made by men so possessed with a spirit of grit and hustle that they ascended ab...Read More

Over 100 years ago, Kentucky bourbon was made by men so possessed with a spirit of grit and hustle that they ascended above men, and became Barons. Sadly, Prohibition and the rising tide of time has robbed us of the families’ signature bourbon recipes. Until now.

Enter The Whiskey Barons Collection, an ambitious undertaking to recreate the taste of the original Pre-Prohibition liquids. The result was worth waiting for.

Bond & Lillard caught the international spotlight when it was awarded the Grand Prize at the 1904 St. Louis World’s Fair. Praised for its appearance, strength, and flavor, from that point on it was triumphantly declared that Bond and Lillard bourbon “bears no equal.”

A homage to the two men who started it all, Batch 2 of this world-renowned bourbon was re-crafted based on tastings from recently discovered vintage bottles dating back to the 1920s. A mix of 4 and 6 year old Kentucky Straight Bourbon, the intent of this offering was to replicate the smoky, wood, and fruit notes found in the original pre-prohibition liquid. Only a limited number are available, so own a piece of history before they’re gone forever. A portion of proceeds from product sales will be used to renovate the Ripy Home, listed on the National Register of Historic Places. 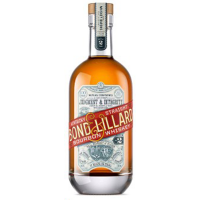