The first Legacy bottling was based upon a green and red labelled bottle first produced sometime before 1904. This second bottling is taken from later in the 20th century, as shown by the labels transition to the more familiar black and white palette.

This label features a three star emblem, a symbol of the state of Tennessee, and an anchor motif, said to represent Jack’s steadfast nature. The original label featured the phrase “medicinal use only” – unsurprisingly, this does not feature on the 2019 label.

The spirit inside the bottle is the same JD we know and love, a sour mash whiskey filtered through charcoal in the Lincoln Country process. The bottling serves up mellow notes of vanilla, toffee, charcoal, burnt oak, corn, cinnamon spice and cream. 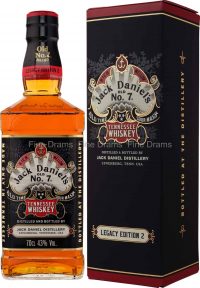