For the first time ever, WhistlePig has released their 15 Year Vermont Oak finished rye whiskey as a cask strength, single barrel, and private selection bottling. The rollout of this brand new program is launching with only 10 barrels for the entire country, and we’ve snagged one of the only ones coming to Florida. This is absolutely a case of lead with your best, we sampled and approved our barrel months ago, and have been drooling over it ever since. Only around 120 bottles were pulled from the barrel.

One of the most unique elements of WhistlePig’s 15 year rye (aside from being one of the oldest available ryes on the market) is the finishing done in Vermont oak barrels, many of which are made from trees on the WhistlePig farm. Vermont is basically as far north as oak can grow, which means the growing season is shorter, which in turns means the growth rings in the wood are closer together, or more frequent. These rings are where much of the most intense flavor is extracted from during the aging process, lending a more dense and complex whiskey. It also means the wood is much more expensive to make barrels out of, part of why it’s so rarely used. 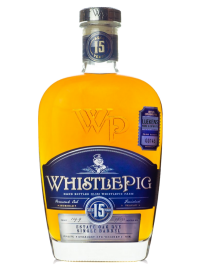