Window Jane is a distillery inside a chocolate factory. Daniel Prieto Preston was an inventor and aerospace engineer whose family has been farming organic cacao in the Dominican Republic for generations. He started making gourmet chocolate and chocolate Liqueur in Brooklyn. From there it was only a small step to building out his own full-blown distillery of Whiskies. Thus was born Window Jane Distillery. Now, we’ve got to say that the distillery was founded in 2012 and production and aging stocks are still building up. That means a lot of their house Spirit is still sourced. But it is super-high-quality and cut to proof with local limestone-filtered water from the Window Jane Mine that give the company its name. Keep an eye on these guys because they are doing good work.

Last year’s “The Vaults” release sold out real fast. It was even listed in “The 20 Best Bourbons of the 21st Century So Far” by The Robb Report. Widow Jane The Vaults 15 Year Old 2020 Edition is a year older and even better, so act fast. Widow Jane The Vaults 2020 was just announced. This exceptional Bourbon is pulled from their standing inventory of Tennessee and Indiana Bourbons that were aged a minimum of fifteen years. After marrying the two Spirits, they were finished in unique Appalachian oak casks that were air-seasoned for five years. This liquid gold is bottled at 49.5% ABV. 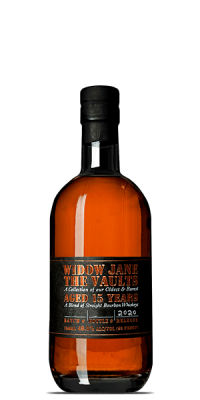